The former residence of the Phillimore family was purchased by Sir James South in 1827. Sir James was an astronomer. He renamed his new home Observatory House. In the garden he built an observatory. He commissioned Isambard Kingdom Brunel to build the dome. Troughton & Sims were asked to supply the mounting for the 12 inch lens he had purchased in Paris. South was unsatisfied with the work and sued all concerned. Furious at loosing both cases he destroyed all the offending articles. As this cartoon shows he then sold the pieces at an auction in his grounds. The lens survived and presented Trinity College, Dublin.

He also waged war with the Vestry, refusing to allow any roads to be built near his house. The vibration he feared would interfere with his astronomical observations. Campden Hill Road was only opened to the south after his death in 1867. While his relations with people were fraught, he doted on his pet dog Tiger. 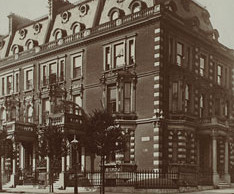 Observatory Gardens were laid out in 1870 but not completed until 1883. Originally part of the Phillimore estate, the land was purchased by a South Kensington builder, Thomas Cawley. Following the usual practice, he sub-contracted the work to others. These firms soon got into financial difficulties and were declared bankrupt. Cawley was therefore forced to complete the construction himself. This is a very familiar story in Kensington. Some developers and builders made huge fortunes while many more faced bankruptcy.

They were built in red brick with painted stone and cement detailing. Most of the flats were let out on short leases at rents between £150 and £200 per annum.

But why was the new road called Observatory Gardens? Turn to the next page for the answer. 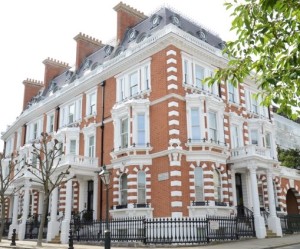 Outwardly Observatory Gardens appears unaltered from Victorian times. But appearances can be deceptive. During World War II a German Junker bomber crashed landed on Campden Hill Road. This was at the junction with Observatory Gardens. The crew escaped and were promptly arrested by the locals.

Observatory Gardens suffered serious damage and soon became very dilapidated. Suddenly in the mid 1990s a set of murals appeared outside the flats. Locals were intrigued. They watched the demolition of the entire mansion block. Only one part remained the façade. Behind the fully restored façade, luxury flats with underground parking were constructed. These were eagerly snapped up, especially by overseas buyers. Since then other developments along similar lines have been undertaken, including Earl’s Terrace.